Melanie Greenwood was born in Liverpool and studied English at the University of Keele. After a stint at nursing in London she became a Bristol-based journalist, spent five years as an Agony Aunt and was a woman’s magazine editor filing for regional, national and international press. In 2016, she was awarded an MA in Creative Writing at Bath Spa University. ‘The Blue Hour’ is her debut novel.

It was a true-life feature Melanie wrote about a woman who tracked down missing people which sowed the seeds of this manuscript. She discovered that a young woman, now elderly, had fallen in love with a pilot during World War 2. The woman was told he’d been killed in action and had spent the rest of her life living under the shadow of their doomed romance. However, it appeared that the pilot hadn’t died; instead, he simply got cold feet at the prospect of a whirlwind wartime marriage. This seemingly heartless way of ending such affairs was not that unusual, especially when pregnancies occurred. Melanie took the bare bones of this story and spent four years researching, writing, re-writing and editing it.

The mother-of-four writes on a kitchen table in a 400-year-old cottage in the heart of Wrington village, near Somerset’s beautiful Mendip Hills. She lives with her husband, Tom Henry, a professional ghostwriter, their teenage daughter, Rowan, an ancient cat and gentle whippet. 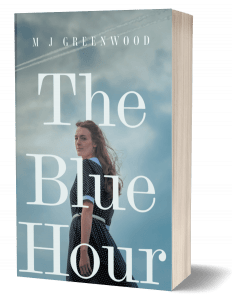