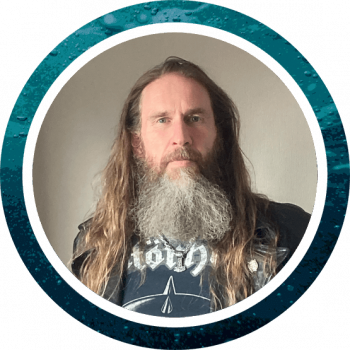 Meet Andy, would-be Viking, author of Me and The Monkey and lover of the bizarre. His mission – infest the world with his strange creations. Son of a WW2 Commando, growing up in 1970s Birmingham, as a teenager Andy became a fan of heavy metal, fronting several metal bands over the years. With a passion for martial arts and competing as a bodybuilder, playing American Football for the Birmingham Bulls took up much of his 20s. Having worked in everything from a jewellery factory, to spraying cars, and even office work, he finally engaged his passion for art to begin a career as a designer, eventually going freelance and setting up his own business focusing on motion graphic design.

Me and The Monkey is his first novel, coming to life as an experiment in having the discipline to write something everyday during a period when he was travelling extensively for work. The story was composed on his phone and iPad during train journeys, flights, backstage at events, 2am in hotel rooms, even during stops at motorway service stations.

Andy lives on the north coast of Cornwall with his artist wife, teenage daughter, cat, two ponies, and constantly growing library. He still secretly thinks he could be a big wave surfer regardless of what reality tells him. 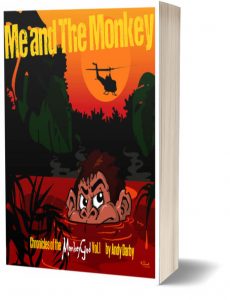