FOR IMMEDIATE RELEASE 7th October 2019
First time novelist is the closest thing to Terry Pratchett since his hat, claims publisher.

THE AXE & GRINDSTONE is the debut novel by PAUL PHIPPS-WILLIAMS, an author based in LONDON who works within the hallowed walls of the Houses of Parliament.

‘Although the temptation would be for me to write a book based on my immediate surroundings, the risk that it could bring down government was a bit too great,” states Paul “so I decided to write a horror-comedy instead. Probably a good idea as the risk of litigation was considerably less and, what with Brexit, everyone is a bit fed up reading about the government. I didn’t fancy being the next Guy Fawkes.’

‘We couldn’t have been more excited when we discovered Paul. When we started BAD PRESS iNK, our goal was to give a voice to authors who might otherwise be ignored by the mainstream. His natural style is a cross between Douglas Adams and Terry Pratchett. In fact, this book is the closest thing to Terry Pratchett since hit hat!’

BAD PRESS iNK is quite unique having two ex-rock stars among their directors. LORD ZION and VIKKI SPIT were founding members of UK glam punk band, SPiT LiKE THiS who, among other things, achieved a Top 10 in the Rock Charts and played numerous festivals around Europe. Since “retiring” to the north of England, LORD ZION wrote his own memoir which achieved Top 3 in Amazon’s Music Biography Chart; VIKKI is now an International Horse Charmer. IAIN PARKE is a novelist in his own right with his wife, PAT BLAYNEY – who has decades within the publishing world as a proof reader and copy editor – being the final piece of this rather odd puzzle.

PAUL PHIPPS-WILLIAMS is available for comment or interview as are any directors of BAD PRESS iNK.

THE AXE & GRINDSTONE is available for review in either digital or paperback formats. 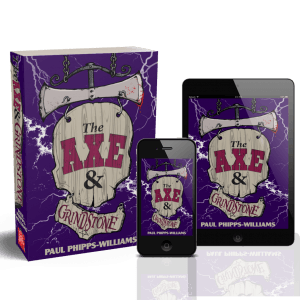